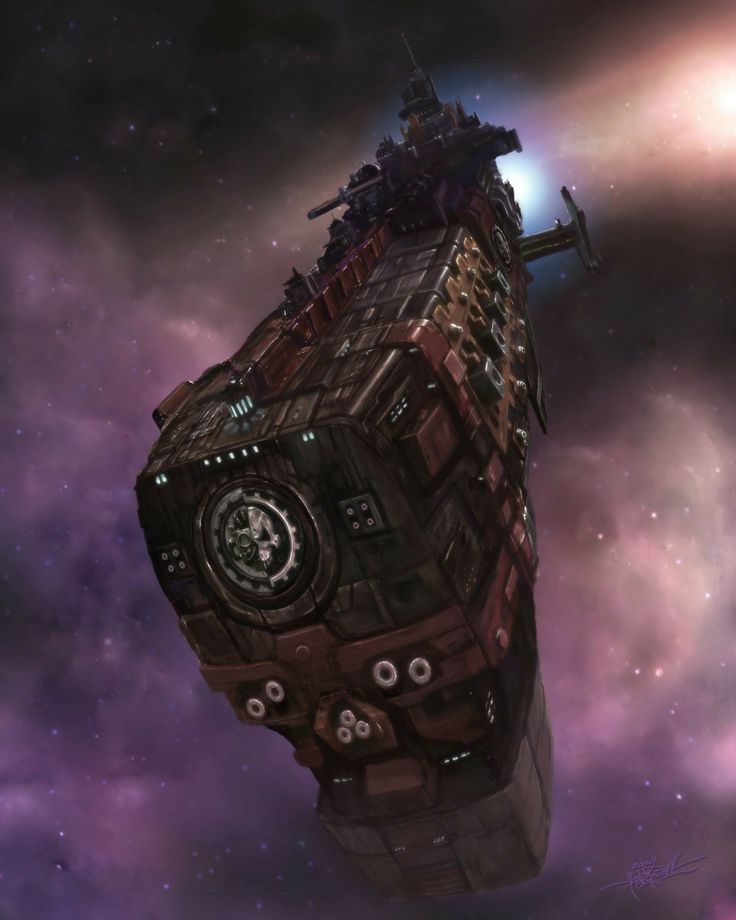 The interior of the ship’s compact conference room stood apart from the rest of the sterile and efficient transport vessel. A well-crafted wooden table sat in the middle of a lavishly decorated parlor, complete with a roaring and elegant fireplace crackling in the corner. Elaborate holy tapestries layered the walls depicting the Imperium’s many achievements against the demonic forces of chaos, and multiple holy relics belonging to the Ordo Malleus sat on prominent display. Transcribed on each panel of the room’s carved wooden walls were thousands of anti-demonic runes, faintly glowing and providing an ever-vigilant aura of protection against the forces of chaos.

As the flames flickered within the gilded fireplace, three shadows danced across the room’s walls. Seated in a place of prominence in the middle of the great table was the Questor, Lady Lianna Thorne. Her well-manicured hands swept elegantly through a stack of parchment as her sharp and ever-watchful eyes scanned each word thoroughly. Behind her stood her ever faithful servant, ready to assist her master at a moment’s notice. The two figures cut the perfect silhouette of the sophistication and grace befitting the noble atmosphere of the parlor. The same could not be said about the third passenger, however.

Gunn leaned back in his chair with his legs angled outward and resting comfortably atop the table. The heels of his boots dug into the hard wood leaving scuff marks and scratches across the hand-crafted surface, but the brawler either didn’t notice or didn’t care. As the fire warmed his back, Gunn shook a small pouch of narcotic herbs across a thin smoking paper lying on the table before him. Once the layering of the brown grain was to his liking, he pulled a second pouch from his pocket and sprinkled a small pinch of red rust flakes over the open ilo-stick. Having completed his task, he leaned back and meticulously licked and rolled the paper as he watched his companion with veiled disinterest.

The Questor’s facade allowed her unimpeded passage all across the Calixis sector, but deep within the bowels of her own ship, she obviously saw no reason to hide her true colors. Her deep scarlet robes prominently displayed her Inquisitorial Rosette among the many armor-lined furls and insignias of the Ordo Malleus. Her face and features looked surprisingly young for her position, but Gunn could easily see the experience and ruthless ambition hiding behind her eyes. He could also see the carved ivory hip of the pistol secured to her belt, and he couldn’t help but toss a quick glace to his twin black swords resting within arm’s reach on the table before him. As if sensing his thoughts, the Inquisitor’s bodyguard silently pushed an engraved ash-trash across the table toward the scum, and Gunn felt the bloodlust coming from the cloaked assassin’s eyes. Diffusing the tension, Lady Thorne spoke in a calm yet commanding voice.

“Your report on the events of the past year is very interesting, Mr. Zurkov-“

“Gunn…” He muttered, but the Inquisitor continued without any reaction.

“Escaping the confines of the Nexus of Shadows, aiding another Inquisition team in their duties, and even helping to destroy a powerful Eldar weapon—it seems you’re far more capable than we original gave you credit for.” Lady Thorne pressed her hand against the stack of parchment and pushed it away from her as Gunn smirked at the compliment. He was about to speak, but the Inquisitor continued before he had the chance.

“I have to admit, I never expected to see anyone from that training mission alive again, and yet here you are. It puts me in quite the difficult position, since we’ve already been on record claiming full casualties following the attack. That’s why no rescue attempt was mounted, you see… There was no need.”

Gunn casually flicked open his lighter and set the end of the ilo-stick ablaze. As smoke began to fill the air around him, soft sparks ricocheted onto the table as the metallic rust burned admits the narcotics.

“Here’s to you, Doc!” Gunn whispered as he exhaled the cloud of smoke from his lungs. “Here, here!” Rucker’s voice echoed over Gunn’s shoulder as he stared into the burning flecks of rust singeing the tabletop in quiet contemplation. After another deep puff on the stick, he lowered his legs and sat forward with newfound interest.

“Look, I don’t really care about any of that. I obviously passed your test, so just do what you need to and get me set up within the Ordo like you promised. The quicker, the better—I got someone I need to kill.”

“Yes, I read about Heneris’ treachery, and I can understand your obsession with him.” Lady Thorne spoke calmly as she laced her fingers together and sat back in her chair. “However,-”

“Obsession?” Gunn’s voice grew louder as his anger rose. “That bastard nearly killed me mate—nearly killed me! He betrayed us, betrayed the Inquisition, and is out there collecting freaks for Emperor knows what! He ought to be hunted down and have his eyeballs flayed, but I’ll settle for cutting his heart out.” Gunn could hear Rucker’s cheers of support in the background, but the stern gaze of the Inquisitor told him she didn’t agree.

“Mr. Zurkov, this isn’t the Ordo Hereticus. We don’t concern ourselves with lesser matters like this, we deal with the important threats to the Imperium. You see, we are the only things standing between the impending demons of chaos and the innocent naïve citizens of mankind. We alone make the decisions which need to be made, and to do that we need strength—both in power, and in image. This means we can’t show any weakness at all, not even once. You understand this, yes?”

“Yeah, we cut down the boogey men and all things that go bump in the night.” Gunn scoffed. “That’s why I’m here, ain’t it?”

“Yes and no actually. You see Mr. Zurkov, you aren’t actually here- you never were. There was nothing to report from the Nexus of Shadows, as the Ordo was never involved in it. And there were no survivors of training exercise four-zero-one, none at all.” The Inquisitor’s eyes blazed down on Gunn and he could do little more than stare back dumbfounded as she continued.

“Proctor Dhar has made it abundantly clear that we cannot show any weakness in our own house. That means once a failure is swept under the rug, it stays there. If I came forward and said we were wrong about the results of that mission, how do you think that would look? We overlooked a survivor? We abandoned one of our own? That wouldn’t look very strong, now would it?” The Inquisitor pushed herself from the table as her words finally caught up to Gunn. He slammed his fist on the table in rage as his clenched teeth bit through the ilo-stick and sent the smoldering husk falling to the floor.

“Politics? After everything I’ve been through-everything I fought against just to get back, you’re going to cut me off? You’re going to abandon me again? Like I’m garbage- like I’m… just some worthless piece of trash to be thrown out?” Gunn stammered in his anger. He barely saw the assassin’s blade before it was embedded into the wall behind him with a trail of his blood and hair flying in its wake. Gunn clasped one hand against the cut on his cheek as he reached toward his swords with the other and lifted off of his chair.

“Actually, I was simply going to kill you. You know, loose ends and all that.” The Inquisitor’s words caused Gunn to freeze as the warm blood dripped through his fingers. “However, a better solution has presented itself. A colleague has asked for your services in a missing person’s case. Apparently, you may have vital information that’s worth a great deal.” Thorne gathered the stacks of parchment slowly as her bodyguard held a deadly looking crossbow pointed straight in Gunn’s face.

“Consider this an unexpected vacation, Mr. Zurkov. Enjoy the sites, help this colleague, or even use this time to track down Heneris and get your revenge- I don’t really care. Just stay out of sight of the Ordo Malleus for the foreseeable future. Who knows, we may still have need for you one day… Assuming we don’t have to cut ties permanently.” She flashed a sickening grin with those last words. Not waiting for a response, the Inquinistor gave her guest a polite bow and left without another word. Her bodyguard flashed Gunn another glare full of bloodlust before gracefully sliding out of the room behind her master.

Gunn’s anger reached its bursting point as he grabbed the edge of the table with both hands and hurled it forward, causing the thick wood to splinter against the hard floor and the contents of the table to crash around the room loudly. Gunn’s own yell of rage was drowned out by the awfully explicit word yelled by Rucker and directed toward their host. The brawler stood alone in the room, panting and staring in silence at the flipped table before him. As he slowly let his muscles relax, he heard a voice speaking from the doorway.

“Shut up, Roxy!” Gunn shouted without thinking. Shaking the thought from his mind, Gunn looked up and saw a fully armored guardsman leaning against the doorframe and staring at him. “Who the hell are you?”

“I’m your escort, sir.” The guardsman said bluntly, his arms crossed over his chest and a look of impatience on his face. Gunn gave the soldier a slow look up and down before smirking.

“I’m not that kind of escort.” Gunn scoffed at the guardsman’s serious tone as he pried his swords loose from the debris on the floor.

“Where’ ya escorting me then, scrub, a holding cell? As if…” Gunn shook his head as he fastened his swords onto his belt. The guardsman continued to stare at him with impatience as he spoke.

“Planet-side, actually. My benefactor wants to meet with you immediately to discuss the whereabouts of Interrogator Quint. You do recognize the name, yes?”

“The Skip? What about him?” Gunn demanded.

“He’s missing.” The guardsman replied bluntly. For a moment, Gunn’s rage was replaced with a sense of worry. He gave the guardsman a serious look and waved his hand toward the door. 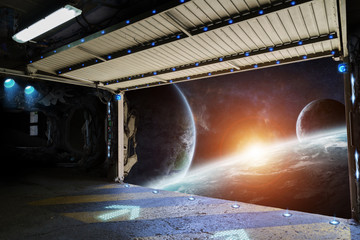 Gunn rubbed his hand gently on the wooden crate containing his pilfered Eldar skyboard nestled in the shuttle’s holding compartment. With a sigh, he ducked his head through the narrow doorframe and glanced around the cramped cockpit. The guardsman and his female copilot were busy with their pre-flight procedure and paid him little attention. Gunn let his eyes take in the large silhouette of the planet looming before them. Scintilla’s surface shone through the shuttles front window, mesmerizing the young brawler.

“ Frostmorn bridge, this is Sufal of the Inquisition transport shuttle, Hourglass, requesting permission to launch.” The guardsman spoke through the radio. After a brief moment of static, a voice answered back.

“ Hourglass, that is affirmative. Hold for launch.” As the static returned, Sufal looked back at his passenger.

“You better strap in, sir. It’s not a long trip, but it can get bumpy.” Gunn quickly squeezed into a seat and began to fasten the straps.

“ Hourglass, proceed when ready.” As the docking clamps holding the shuttle released and the little ship’s thrusters kicked to life, Gunn stared forward at the planet with determination in his eyes.