Inquiries on the Gallows Way 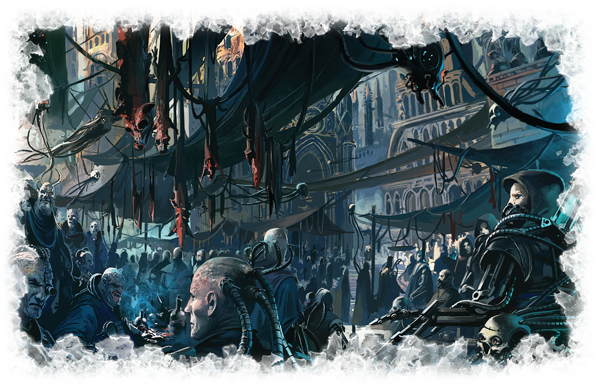 Amsterdam pressed his naked torso against the dirty pane of glass passing for a window in the rundown apartment quarters he’d secured for himself. With his shotgun resting comfortably on his shoulder, he pressed a pair of worn down magnoculars to his eyes and scanned the Scrap Market stalls littering the street below. The area was deserted for the most part, but Amsterdam kept a weary eye out all the same.

“Movement through the underhive of Solomon’s Hive Gloriana has been slow. It has taken me three days wading through the darkness and runoff that fill the streets of this shithole, and I’m still no closer to my quarry than I was when I first made planet fall. In fairness, most of the holdup can be attributed to the presence of Inquisitor Rykehuss of the Ordo Hereticus. Not only has he requisitioned most of the Gallows Way’s enforcement personnel for his own personnel use, but he has sent a majority of the local citizenship underground out of fear.”

Amsterdam spoke quietly yet clearly, a nearby Vox recording his every word. Sweat slowly beaded and fell across multiple radiation burns dotting his dark skin. A low hanging ceiling fan spun slowly above him, doing little to negate the heat pouring into the room from the boiler down below. Despite the cramped and uncomfortable conditions, Amsterdam kept watch on the Scrap Market below from his perch at the window.

“Despite the interference, I have been able to make contact with Oath Captain Nils. She leads the local Sanctionary precinct and was reluctant to assist me at first. Once my credentials had been verified however, she was able to inform me of the whereabouts of the acolytes and the status of their mission. It seems they have ventured down into the deephive in pursuit of the cult of the Blessed Flesh.”

Amsterdam stopped talking and focused his magnoculars on a specific stall below. The outline of Cog Lostok’s establishment could be seen clearly through the dark, and flashes of movement within had caught the arbiter’s eye. After a few moments, a young guttersnipe emerged from the stall having failed to find anything of value. With an annoyed sigh, Amsterdam relaxed and returned to his log.

“Like so many times before, it seems a local ‘guide’ has been tasked with accompanying the acolytes, a sanctionary called Chad. Note to self, that seems to be a very common name across a number of worlds. It may make for a possible emergency alias in the future, should the need arise. I was hoping to make contact and speak with this man myself, but Captain Nils has failed to have any contact with the man since the acolytes made their way downward.”

“As for my own mission, progress is nearing completion. Information regarding a deamonic incursion was easy enough to liberate from Rykehuss’s channels, and thanks to an abundance of security footage and eye witness accounts from a slightly uncooperative ganger, I have been able to confirm the whereabouts of each member of Redacted Cell during said outbreak aside from the underhiver. While it may be too early to celebrate, I believe I may finally have the answers I’ve been seeking for a while now.”

Amsterdam lowered the magnoculars and pushed himself off the glass. He let his shotgun fall from his shoulder and rest comfortably at his side as he stared at the vox recorder in front of him.

“Inquisitor Rykehuss has made a flashy showing here in Hive Gloriana, but I’m afraid it may all be for naught. If, as I suspect, the acolytes or some individual among them is responsible for the incident, then it will be handled in house- not by the Ordo Hereticus. These acolytes have shown themselves to be reckless and unpredictable in the past, and I won’t allow them to make a mockery of our Lord’s name any further. I will take care of any problems which may exist personally, even if I have to eliminate the threat myself.”

Amsterdam halted the Vox’s recording, and rested his shotgun against the table’s shaky frame. He picked up his data-slate and began thumbing through numerous voice files until he found the recent recording. Loading the file up for playback, he set the data slate down and returned to the window. After a second, the vox chimed to life and Amsterdam heard his own voice coming from the speakers.

“This is Constable Conrad Amsterdam, on order from Judge Artandis Jaxx and in service to our Lord Inquisitor Gramen Sand, recording personnel log ‘Solomon Three’. I have recently acquired accommodations in a small apartment overlooking the local Scrap Market in order to make contact with a local scrap dealer named Cog Lostok. I believe he is in possession of a vital piece of intel pertaining to my current mission. Movement through the underhive of Solomon’s Hive Gloriana has been slow. It has taken me three days…”

As the playback continued, Amsterdam swept his magnoculars across the deserted streets, waiting patiently for his prey to show himself.

Inquiries on the Gallows Way